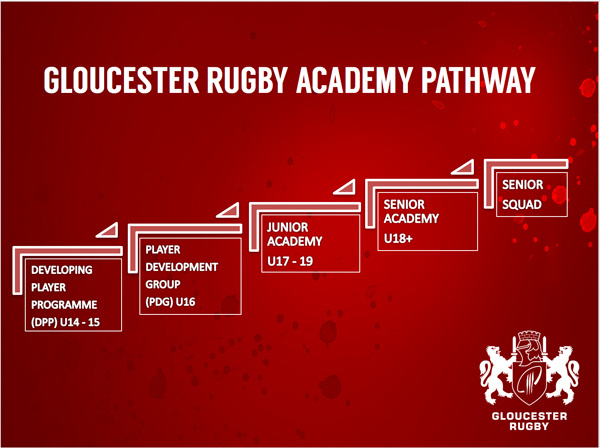 The Developing Player Programme (DPP) is a pre-Academy programme which has been specifically designed by the Gloucester Rugby Academy staff to allow players from U13 to U15 the opportunity to receive added support with their rugby development.

This is achieved through tactical games, technical breakouts, movement literacy and lifestyle support prior to selection for the Academy at U16-U18 levels.

The programme which is overseen and driven by Gloucester Rugby Academy staff is run over five development sites that are based in Cheltenham, Cirencester, Hartpury, Stroud and West Oxfordshire.

Each site is staffed with highly qualified and experienced coaching teams from a range of coaching backgrounds to enable the best support possible for the developing players. These coaching teams include school rugby coaches, local rugby coaches and S&C coaches studying at Hartpury College, University of Gloucestershire and Oxford Brookes University.

Regular contact from these coaching teams, the Academy coaching staff and other support staff means that the Gloucester Rugby DPP is going from strength to strength as it strives to be the leading Developing Player Programme in the Country.

Each season clubs and schools are given 5 nominations per age group and asked to put forward players who they believe have either technical, tactical, mental or physical attributes that makes them stand out from their teammates. Players may not have all of these attributes but players who show they are stand out in one of these areas should be nominated for the programme.

There is usually some cross over between clubs and schools as many players will be nominated by both, we would encourage both parties to communicate and check nominations to allow more players the opportunity to be part of the Pre-Academy programme.

Nominating schools and clubs are encouraged to get involved in the programme either through coaching, CPD events or attending sessions to observe the players and coaches already involved in the Developing Player Programme to help share and spread the DPP themes.

Any specific questions should be directed to Matt Teague, Gloucester Rugby Academy Coach.