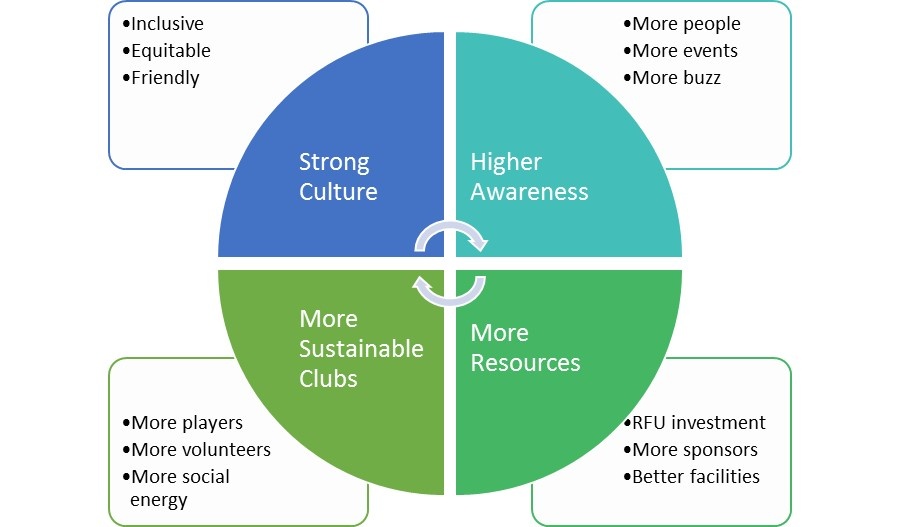 Oxfordshire RFU | Oxford Brookes University Marketing Partnership
Year 3 Feedback
The Oxfordshire RFU | Oxford Brookes University partnership was a three-year programme where second year Marketing Undergraduates taking the Principles and Practices of Marketing module, are split into teams to engage with Oxfordshire’s nine Cup Champion Rugby Clubs to understanding their marketing issues and how these can be resolved:
1. In Year 1 research was conducted to identify the issues surrounding recruitment and retention – four key learnings emerged:

2. In Year 2 efforts were directed at understanding how social media could be exploited to raise awareness of the clubs, to boost interest in the ‘club-offer’, to encourage people to visit the club as spectator, player or potential volunteer. As a result, a social media masterclass was hosted by the University with 12 clubs attending
3. In Year 3, teams again made research visits to the clubs to understand the impact of the RWC on the club’s threats and opportunities and to understand how the clubs perceived ‘Legacy’

Current Status
A summary of the findings to date are carried below, within this section of the website the full club findings can be found and downloaded.

Abingdon
“The clubhouse was much busier than normal, lots came down for the screenings -not only members but also relatives, friends and colleagues. There was a real buzz around the place!”
“I am not sure about long-term effects, telling from the last world cup, there was only a small increase in membership”
“Abingdon needs to ensure the ‘personality’ of the club does not come across as frightening to new members but shows its friendly, local and welcoming characteristics through social events.”
“The Standards of the club are respect, fitness and fun. We have a strong focus on respect for each other, we really don’t like parents pushing their children too much”
ACTIONS:
1. Continue to visit the schools and host ‘satellite events’ and get involved (where possible) in the school rugby programs directly
2. Work closely with the RFU to promote the benefits of getting involved in the sport
3. Boost the club’s social media presence and encourage younger athletes to get involved on the club pages, for example the use of a hashtag to share game photos
4. Oftentimes it’s the sport itself that attracts people into the club. The key to retaining members is to emphasise the camaraderie and community within the club through social events

Chipping Norton
“England going out is seen as a barrier, this is because in rugby you want hero’s.”
“You’ve got to want to do it – Legacy is a tough challenge!”
“A lot of things being used in the world cup will be given to clubs – nothing is being wasted – everything is being put back into Rugby”
Challenges include:

Banbury RFC
“RWC created exposure to those who were not interested or knew anything about the club”
“The goal for Banbury was to increase membership by 20%, the RWC helped them achieve this”
“The RWC triggered investment into the local rugby clubs. Banbury were now able to accommodate for more players”
Banbury’s main legacy “is to involve everyone from all ages and abilities and to create a community atmosphere”
“England’s elimination from the RWC reduced involvement therefore, making it harder for Banbury Rugby Club”
“There is a sense of excitement amount Banbury rugby club, and hopefully The ugby World Cup will help expand the club in all ways”
The legacy:

Chinnor
“The Rugby World Cup 2015 has been a great opportunity for Chinnor to create awareness of the club; unfortunately, England were out in the early rounds so the club didn’t gain as much awareness as they would have liked but we still managed to do a few things in relation to the games.”
“Great for raising club awareness. It is important to capture the interest of young boys who may be interested and then making sure that they are captivated enough to want to play with a team.”
“The showings of all the games in the upstairs bar were all advertised using leaflets that were handed out around the village. This meant that there was a great community atmosphere. However, once England were out of the Cup the turn out for each game reduced significantly.”
Legacy is a virtuous circle:

Littlemore
“We no longer want to be a drinking team with a rugby problem. Instead we want to be a rugby team with a drinking problem.”
“Legacy is ‘The Future’, and what the club and the players can offer long term”
“We need to achieve stability for the club – sort out the ‘fringe players’ and making it a more social club and by doing so keeping it alive”
“The RWC hasn’t helped popularity at ALL”
“I’ve received some emails from people who were interested in joining in recent months and the RWC was showed in clubhouse – about 30 people came to watch England games. If England had done better than the Rugby Clubs would’ve become more popular”
“I hope The Rugby World Cup is already having a strong effect on the future legacy of the club, as they are 1 of 50 clubs that have been chosen to take part in and host Return to Rugby, an RFU programme that inspires ex-players and brings them back into the game.”

Wallingford
“Our legacy is trophies around the clubhouse’; The Vice Presidents Day; Traditions amongst the roots of the club; Juniors coming up the ranks; Creating memories for generations to come.”
“The Rugby World Cup allowed us to host 9 parties for the World Cup games. These allow and encourage team members and the community to come together and celebrate the legacy of Rugby.”
“England’s early exit from the RWC created less of a party atmosphere around the club at weekends and quieter Fan Villages.”
Legacy means:

Witney
“An afternoon was held at the club for the Final, which a few locals and parents attended; we realised they could have done more – no big screens etc.”
“In the run up to World Cup we ran promotions in the centre of town, with ‘minis’ playing tag rugby, free merchandise given to members of the team from the RFU, Festival in the park, etc.”
“Currently, each age group tries to find their own sponsors for club kits and bits and pieces so hopefully with the Rugby World Cup we can go and speak to a few more companies collectively to see if we can get them more involved”
Legacy:

Oxford Harlequins
“Oxford Harlequins, with Oxford RFC have formed the Oxford Rugby Partnership, which fields a variety of different teams, including 5 men’s teams, a ladys’ team and a range of juniors.”
“Will Greenwood, former England World Cup Winner and British and Irish Lion, came to the club to promote the RWC and increase awareness about the importance of participation”
Legacy:

Conclusion
Amongst this sample there is a widespread recognition that club success is founded on having the right culture and on broadening awareness of the club and its offer; as a means to attracting greater investment and involvement so as to improve and build club sustainability. The RWC and the associated programmes run by the RFU, Oxfordshire RFU and by Oxford Brookes University would seem to have been instrumental in helping generate this knowledge.